Women’s Health Matters is an independent, non-partisan think tank that works to improve the health and wellbeing of women in the ACT and surrounding region.

We advocate on behalf of all ACT women, especially those experiencing disadvantage and vulnerability.

We seek to improve the health and wellbeing of anyone who identifies as a woman.

Women’s Health Matters is committed to reconciliation and acknowledges the First Australians whose cultures are among the oldest living cultures in human history, as the traditional custodians of this continent. We also recognise the history of dispossession experienced by the First Australians and the impact this has and continues to have on Aboriginal and Torres Strait Islanders. We recognise the Ngunnawal People as the traditional custodians of the land on which we live and work, and pay our respects to their Elders past, present and emerging. We recognise the strength of Aboriginal women and their continuing connection and contribution to this land, these waters, and our communities. May we walk gently and treat the earth and each other with care and respect.

The aim of our research was to understand the needs of ACT women who have been sexually assaulted and the way they approach seeking help in the ACT – and an important part this was to gain an understanding of women’s views on what worked and what didn’t, and their suggestions for how the response system could be improved to better support women seeking supports for mental and physical health, community support, and police and legal services.

Click here to read our submission including the findings from the survey of ACT women’s experiences of seeking help after a sexual assault.

Are there areas in Canberra where you feel unsafe? Or places that have been well planned and you do feel safe? We need your help!
View on Facebook
· Share

The ACT Government's Take Control – Live Well program is a 3-week program that gives you the skills and confidence to take control of your chronic condition. You’ll be able to connect with others and access support to enable you to make changes and live well. At the end of the three week program you will have:🗒️ A personal plan to improve your wellbeing🗒️ A handbook with useful resources📱 The option to receive regular text message support to help reach your goalsVisit the website to find out more and when the sessions will run 👉 www.health.act.gov.au/services/chronic-disease-management ... See MoreSee Less

You might remember the Canberra Safety Map, the interactive tool we launched to allow Canberra women to identify places where they feel safe or unsafe in the region. Women’s Health Matters is currently using the Canberra Safety Map to help inform the ACT Government’s Woden Town Centre redevelopment. The Government’s plan includes a new CIT campus and public transport interchange. All women who may visit or live in the Woden region are invited to contribute to the map and help in the development of this important project. 📍 bit.ly/3r9T0mQ ... See MoreSee Less

Are there areas in Canberra where you feel unsafe? Or places that have been well planned and you do feel safe? We need your help!
View on Facebook
· Share

The ‘Her Way’ recommendation report has been released and authored by Dr Marisa Paterson MLA‘Her Way’ is a campaign to support women to take up active travel in Dr Paterson’s electorate and from Canberra’s southside. At Women’s Health Matters, we believe transport and public spaces must be gender sensitive!The way we use and experience transport and public spaces is gendered. Women may need different things from transport to drop off kids at care or go to health appointments. Women and people of marginalised genders also experience the safety of public spaces differently than men. Stay tuned for how we’re helping to contribute to improvements to Canberra’s transport options. Her Way report 👉 bit.ly/3e8z3qn ... See MoreSee Less

The APS has released their report ‘Realising the benefits for all – APS Gender Equality Strategy 2021-26’.The Australian Public Service is a major employer of ACT women, and we’re encouraged to see gender equality being promoted in their workplaces. Promoting gender equitable cultures and structures is key to preventing gender-based violence.The priorities of the strategy are:• Leadership and accountability• Respectful workplaces and empowered people• Shifting gender stereotypes• Flexible ways of working• Gender data• Leveraging external influence. You can read the full strategy here: bit.ly/3lZfoxj ... See MoreSee Less

We give voice to the voiceless. We make the invisible visible. 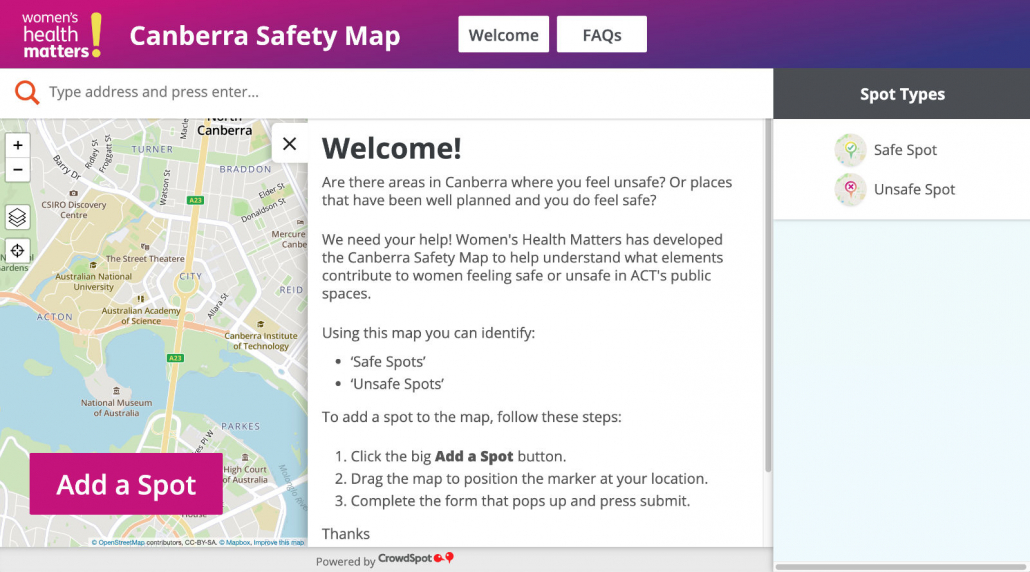 Women do health differently. Our research and advocacy is informed by women for women.